Remembrance Sunday is upon us once more, when we remember those who gave their lives in the two world wars and later conflicts. Across the United Kingdom, many people will gather at war memorials to pay their respects for the first time in two years, with 2020’s commemorations being severely curtailed due to Covid 19 restrictions.

Although monumental masons are associated mainly with the provision and restoration of headstones in cemeteries, they are also able to work on war memorials too and at Sarsfield it has been no different.

In 2018, to mark one hundred years since the end of World War One, Sarsfield worked on a memorial for Stockbridge Village, which was placed in the Neighbourhood Centre there. The idea for the memorial came about following the closure of St Jude’s Church in 2016. The Tenants’ Forum raised funds to finance the memorial, which contains slabs commemorating both the living and dead.

Another memorial project that Sarsfield were involved in was the Hale Village war memorial, back in 2004. The cenotaph at the corner of High Street and Town Lane was dedicated, with the Hale branch of the Royal British Legion also being launched. Sarsfield’s involvement in this project was the cleaning of a boulder stone then carving the names of eleven soldiers from both world wars who had Hale connections (photo right by Phil Nash). This had come about following extensive research by the Hale War Memorial Restoration Committee. The boulder had been donated by Asda, having once stood outside their store in Halebank. 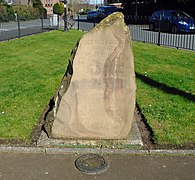 Sarsfield were proud to be involved in the Hale Village war memorial rededication, the original cenotaph having first been unveiled in 1920 by Lord Chavasse. The wider project also involved the provision of railings, the original ones having been melted down for the war effort during World War Two. The newly cleaned was blessed, hundreds paraded through the village and Jim Ross of the British Legion told the press “Everything came together well at the end and it was a magnificent occasion”.

Private graves may be Sarsfield’s day to day business, but it is always nice to have variety. It was very satisfying for us to be involved in such poignant events with these war memorials that remember so many brave servicemen and women.